NADIE (Now Drama Australia) was founded in 1976, whose importance in the development of drama education in Australia is incalculable. Before that, many drama teachers had found their first collegial home in the state Speech and Drama Associations from which many of the ‘new’ drama teachers were beginning their careers. Although parochial, drama did travel across borders, and occasionally its advocates did meet; one such significant rendezvous was New South Wales Educational Drama Association’s first state drama conference at Terrigal in 1974. This was important partly because it was obviously one of those especially memorable events for those who attended – in the words of its director 30 years on: ‘one of the most incredible experiences of my life – so vibrant, so exciting . . . we knew we were making history’. Just as importantly, there were a number of key pioneers from interstate, who took away not only new ideas, but a new sense of communitas that was to become embodied less than 2 years later.

In the mid-winter of 1976, in a chilly scout hut in the Adelaide Hills, South Australian Drama Adviser Gordon Foulds held a delegate meeting of members from all the (then) state educational drama associations. After heated debate, played out in drama at the conference as much as in the meetings themselves, the new association NADIE (National Association of Drama in Education) was born. NADIE was a loose affiliation of the state associations, whose main purposes would be to hold an annual conference, provide regular publications, and act as a cross-state lobby and advocacy group. History has proved it an ideal structure – productive, resilient and self-sustaining, able to acknowledge and utilise the diverse input of each state association.

Within 3 years, all the states and territories had affiliated with the new association, and chipped in a proportion of their annual subscriptions to fund it. The local associations have quite distinct profiles and run their own business, their own state conferences and journals, and only appeal to the national association to help in moments of crisis, like the imminent disappearance of drama in 1989 in NSW, where the concerted lobbying from the national association and all states had some softening effect. All the state associations are still in existence and continue to survive and prosper.

NADIE has flourished, too, with very few changes or breaks in the continuity. The national conference is still annual, and a very important time for teachers to get together and lose their sense of isolation as very small players of a minority game in a vast country. The NADIE Journal in the early 1990s (now simply titled NJ) reflected the growing interest in research by becoming one of the first refereed journals in the field. This caused some grumbling among the teachers who mainly scan journals for ideas for next Monday’s class, and led to the publication of an annual practical magazine (ADEM – Australian Drama Education Magazine) that complements the flourishing magazines and newsletters of the state associations. There has been one solitary destabilising incident, which briefly threatened to split NADIE in 1982, a row over links with South African drama education during the period of cultural boycotts. No change more radical than consensually changing the association’s name in 1998 from NADIE to Drama Australia has occurred since.

Two other events, both conferences, stand out in Drama Australia’s history (and, we would maintain, drama education’s history globally) as both affirmative and consequential in the long-term establishment of drama education. The first of these was the 1990 NADIE conference in Sydney hosted by NSW Educational Drama Association (now Drama NSW), which, as we have noted above, had a large number of overseas delegates and speakers. Rather to our surprise, some of these – notably the North Europeans – were highly respectful about the quality and sophistication of Australian drama education. We were so used to battling along with our own curricula, isolation, uninterested colleagues, etc., and clinging to each other muttering stirring words of support that we were quite taken aback by compliments. Contrastingly, we were repelled by the skirmishes these very visitors were having among themselves, as part of the Battle of the Paradigms, which was then at its height, and decided we would have none of it.

Thus emboldened, we started to reverse the trend of importing people to show us how to do it. The number of overseas experts invited to NADIE conferences took a dive. This 1990 conference also came at a time when important events were happening internationally, initiatives towards a more global presence for drama. Fifty-two Australians and several New Zealanders flooded the inaugural IDEA (International Drama/Theatre and Education Association) Congress in Porto, Portugal (1992).  This Southern invasion of what had been intended as a restricted delegate conference was a factor in reshaping IDEA from what was intended by its founders, to what it is now. Immediately this broadened the Australian drama curriculum – for the first time we started meeting Africans, Eastern Europeans, South Americans, who were doing quite different things with drama in their schools and communities that we had not conceived of through our rather restricted pursuit of the previously dominant Western overseas models. We discovered that what we were doing was of interest to them too, and many of them, even those from the countries we had looked up to like Canada and the USA, envied us and our level of curriculum establishment compared to their own (now that was a surprise). With the naive overconfidence of the toddler, we threw ourselves into the Byzantine ideological struggles over IDEA’s foundation. More or less accidentally and only semi-wittingly we tipped the balance of power, and found ourselves with the new global association’s first Vice-President, Kate Donelan, and the next triennial Congress to host. That 1995 2nd IDEA World Congress, held in Brisbane and incorporating the NADIE conference, was the second of the stand-out events in NADIE’s history, and the more influential in terms of drama’s place both in the educational establishment and in the curriculum. Its size (nearly 1200 delegates including 400 international and 500 from interstate) and its scope (13 international keynotes, 38 theatrical performances, 300 workshops and papers, a schools fieldwork program and a red-hot social club) surprised and impressed many colleagues in other disciplines until now far grander, and in education offices. In Brisbane, at this Congress, Australian drama education came of age.

A selection of paraphrased extracts from O’Toole, J. Stinson, M. and Moore, T. (2009) Drama and Curriculum: A Giant at the Door Springer.

Below are a selection of images from the Second IDEA World Congress hosted by QADIE/NADIE in Brisbane 1995 (both now Drama Queensland and Drama Australia respectively). 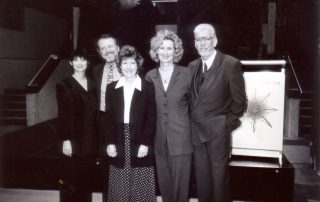 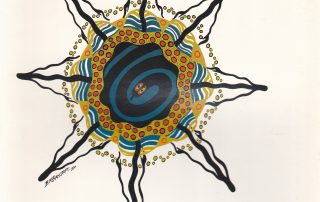 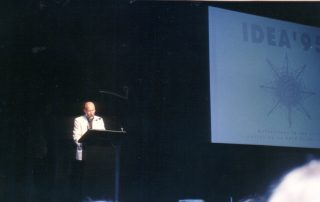 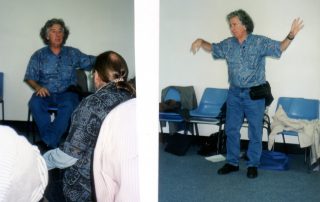 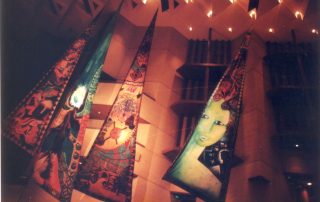 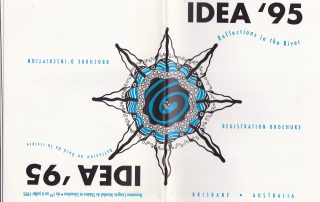 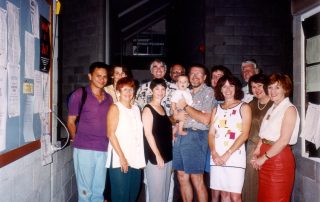 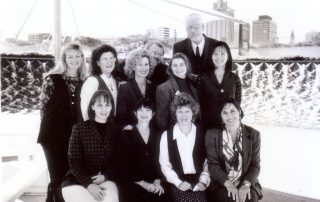 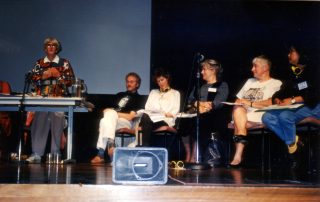